Read also
You are at:Home»Getting started»To turtles, plastic is food.

Poor turtles. They live in a constant illusion that the sea is a candy shop and become victim of our plastic (mis)usage. The tons trash of humankind end up in the seas and oceans, the home of different fishes and mammals. Yearly tons of them fall victim to our plastic (mis)usage as they mix the lighters and plastic bags up with eatable snacks.

“More than 1 million seabirds die each year from ocean pollution and ingestion or entanglement in marine debris. Marine debris is man-made waste that is directly or indirectly disposed of in oceans, rivers, and other waterways,” according to Seeturtles, a non-profit that promotes conservation travel through wildlife tours.

Our garbage creeps into the sea via rivers. That is the final destination, it has nowhere else to go. That’s how gyres are created: areas of slow spiraling water and low winds and along coastlines. About 80% of the lost material comes from landfills and other urban sources. It damages coral reef, entangles sharks and from the bottom of the sea it goes to… the stomaches of animals.

If the sea creatures survive the harsh interruption with their digestive system and “get away” with feeling sick, it will most likely continue the damage in the rest of the ecosystem. The fish that just had a lighter for lunch might be eaten by a bigger fish: and so the lighter ends up in his belly. The fish might be caught by human beings on a boat, and the next day we might have micro pieces of lighter for lunch. “Plastic toxins end up in fish, which end up on our plates, which end up inside our bodies,” tells See Turtles.

Besides lighter, the most common things in the trash island are toothbrushes, plastic bags, balloons, plastic bottles and all the matching caps.

Yet another reason to ban plastic. Let’s leave the turtles and other innocent sea citizens in peace, let’s take a responsible place on the planet 🙂 Make sure yummy meals and drinks don’t bother our friends on the bottom of the sea.

Read more about marine litter and turtles on the website of SeeTurtles. 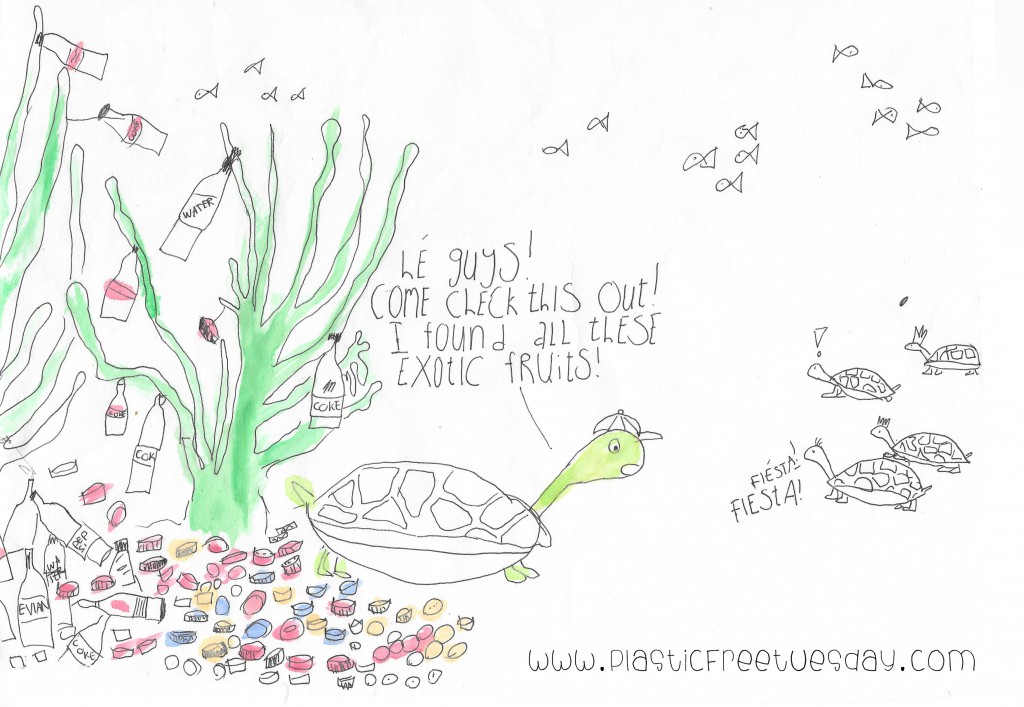 Homemade pumpkin soup, any cooking by her sister Annemieke, hard rubbish, exotic markets, traintrips, obscure records and a million other things make Gerda very happy. The opposite counts for pollution and unfair treatment of our planet. Therefore Plastic-Free Tuesday is one of those things that Gerda happily included in her never ending to-live-for-list. She is a fulltime treehugger with an extra mission on Tuesdays. And that again makes her very, very happy. Gerda is a real nomad, she has been living in many different countries. At the moment, she's in Morocco. Gerda designed the Plastic-Free Tuesday logo, develops offline Plastic-Free Tuesday activities, writes blogs, designs social media content, and helps developing our communication strategy.