Read also
You are at:Home»Cleaning»Microplastics: Five things you can do about it

Every time we wash our fleece jacket, sleeping bag, or running tights, thousands of microplastic fibers make their way into our rivers and oceans. Microplastics are small pieces of plastic that are less than 1 mm in size. They are not or only partially filtered by sewage treatment plants. The tiny pieces of plastic end up in rivers and oceans, where animals can easily ingest them. The plastic and the chemical additives on the plastic can make animals sick. Unfortunately, it is really difficult to get rid of the microplastics in our oceans, because there are way too many pieces and because they are too tiny to filter out. But thankfully, we can do something about the problem before it becomes an even bigger problem! Here are 4 things you can do to reduce the amount of microplastics that is flowing into our oceans.

There are lots and lots of clothes out there that contain plastic fibres. Check the labels to be sure that you are not buying this kind of clothes. The most common synthetic fibres are polyester, spandex, nylon, and acrylic. To be safe, choose materials such as cotton, wool, linen, silk, or bamboo.

I know it is not easy to avoid synthetic material. Sometimes it is nearly impossible to find a product that is made of natural fibres. If you really cannot find it, but really need it, buy second hand, borrow or rent. For example, I recently needed a sleeping bag for a hiking trip. In hindsight I should have planned more in advance and asked my friends if I could borrow a sleeping bag rather than buying one last-minute. I actually tried to borrow a sleeping bag, but it was way too big and heavy for a hiking trip. But now that I am thinking about it again, I maybe could have rented a sleeping bag at an outdoor store. If you are based in the Netherlands, you should definitely explore the platform Peerby. I have borrowed all kinds of things through Peerby, including bedding, a steam iron, and a sewing machine.

If you see no way to avoid buying synthetic clothes or other products, choose wisely. Some companies are investing in research and development to solve the problem of microplastics in our oceans. Simply google the brand name in combination with “microplastics” to get a general idea of what a company is doing regarding this issue. Certain outdoor brands are very active with regard to microplastics (Patagonia for example), while other brands appear very passive regarding the issue.

For each individual synthetic item you wash, at least 1,900 microplastic fibres are released into our waterways. Washing less often means less frequent releases of microfibres. Moreover, your clothes will last longer, which means that in a life time you need fewer replacements. It also saves energy, water, and money!

I hear you think… “gross! I don’t want to stink.” Of course you don’t, no-one does. But I have noticed that some items don’t need to be washed as often as I did. Sport t-shirts get easily smelly, but this is much less the case for my woolen running tights or the fleece jacket that I wear on top of a t-shirt. Also, I have made it a habit to hang my clothes outside for a while rather than throwing them on a big pile, where they much easier get smelly.

Research by University of California Santa Barbara (commissioned by the outdoor brand Patagonia) shows that top-load machines with a central agitator release more microfibres than front-load machines. In the top-load washers used in the experiments, clothes shed 170% more microplastic fibre compared to front-load washers. It is not clear whether this difference also applies to modern top-load machines without a central agitator (this is a vertical device in the middle of the washing machine that helps moves the clothes around, see picture below).

If, like me, you don’t have a washing machine at home but need to go to the laundromat, choose a laundromat that has front-load machines. In my case, these are a little more expensive (USD 4.25 versus USD 3.75), but I regard the extra fifty cents as microplastics tax. 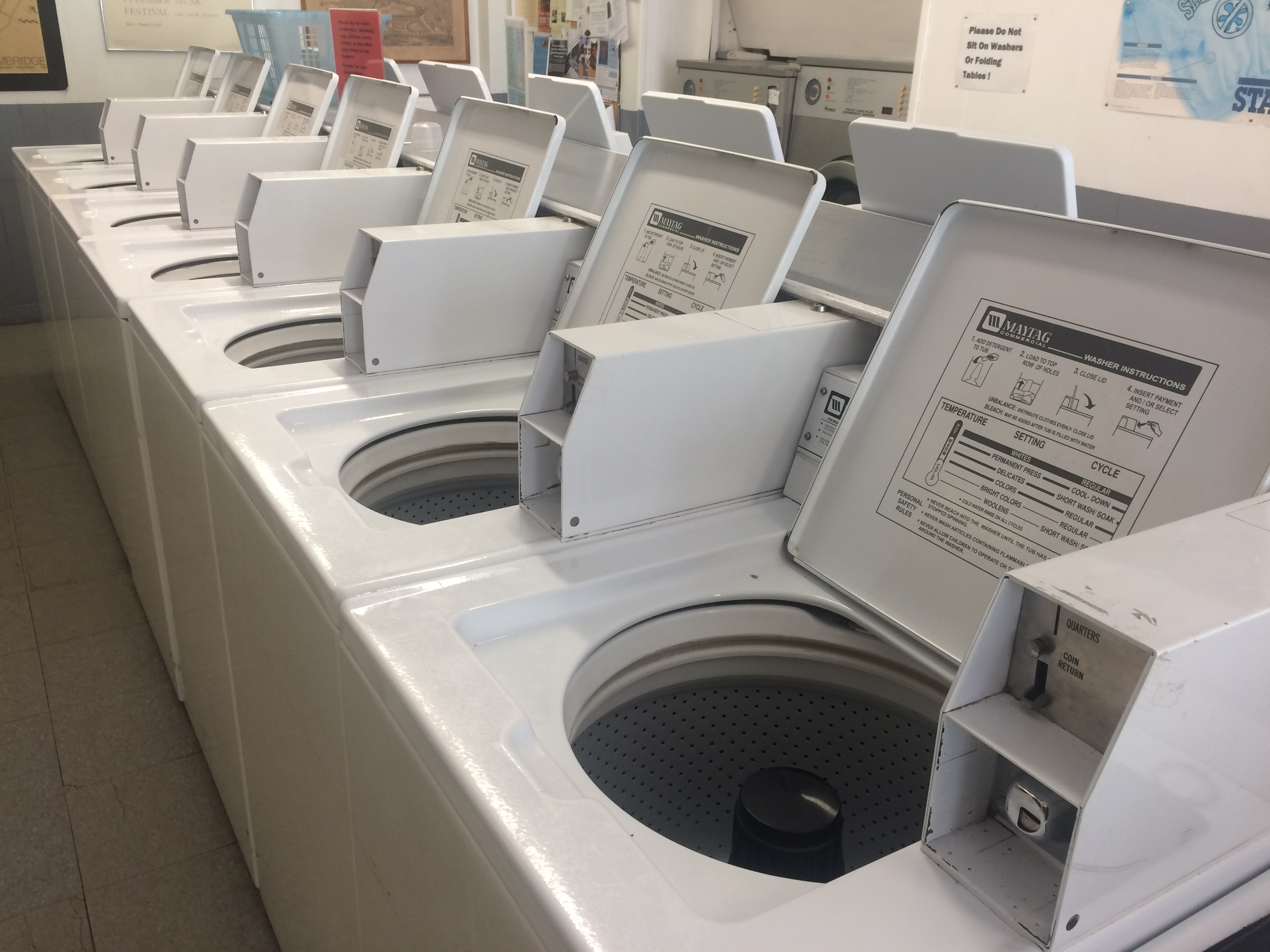 Researchers have also investigated whether the way we use the washing machine has an impact on the amount of microplastics. Unfortunately, research findings are contradicting. A Swiss team found that the temperature and the duration of the washing cycle does not influence the number of fibers shed. They also concluded that detergents leads to more microfiber release compared to washing with only water, but that it does not make a difference whether you use liquid detergent or powder. However, the Mermaids project, funded by the EU, advices consumers to use liquid instead of powder; to choose a short cycle on low temperature; and to add fabric softener.

Some companies have also started to look for solutions. One proposed solution is a filter that catches microfibers before they end up in the sewage system. Two Germans Oliver Spies and Alexander Nolte, developed the Guppy Friend, which is made of tightly woven nylon that traps microfibers. It’s kind of a filter within the washing machine. Although I like the idea because it is simple and cheap (about EUR 30), I am skeptical because the company claims that the bag catches 99% of the microfibers, yet it has not published any test results. Another project that tries to catch microfibers in the washing machine is the Cora Ball, developed by the inspirational people of the Rozalia Project. The Cora Ball is a ball made of recycled plastic that you just throw into the washing machine, where it it supposed to catch the microfibers during washing. I really like the project’s creativity and simplicity, but there is no evidence that this approach actually works.

Instead of filtering the microfibers in the washing machine, you could in theory also install a filter outside washing machine. One such filter that is on the market already is the Lint LUV-R Discharge Filter, which claims to screen out synthetic microplastic fibers. The product was developed to protect septic systems from lint, but in the process it also screens out synthetic fibers and protects the environment. The question is how effective the filer is, but the company told me that they are doing third party testing and that they should have results soon. I really hope they are willing to share the test results with us.

Even if you and I completely stop buying and washing synthetic clothes, the problem will not be solved because not everyone has the time, money, or interest to do the same. This is why we need to get the clothing industry to acknowledge the problem and to work on solutions.

You can contact your favorite clothing brand directly and tell them to do something about the problem and sign this (click here) petition on the website of the Story of Stuff. The petition calls on clothing brands to do three things: publicly acknowledge the seriousness of the threat that synthetic microfibers pose; commit to investments to investigate and test potential solutions; and share what they learn with each other and the public. 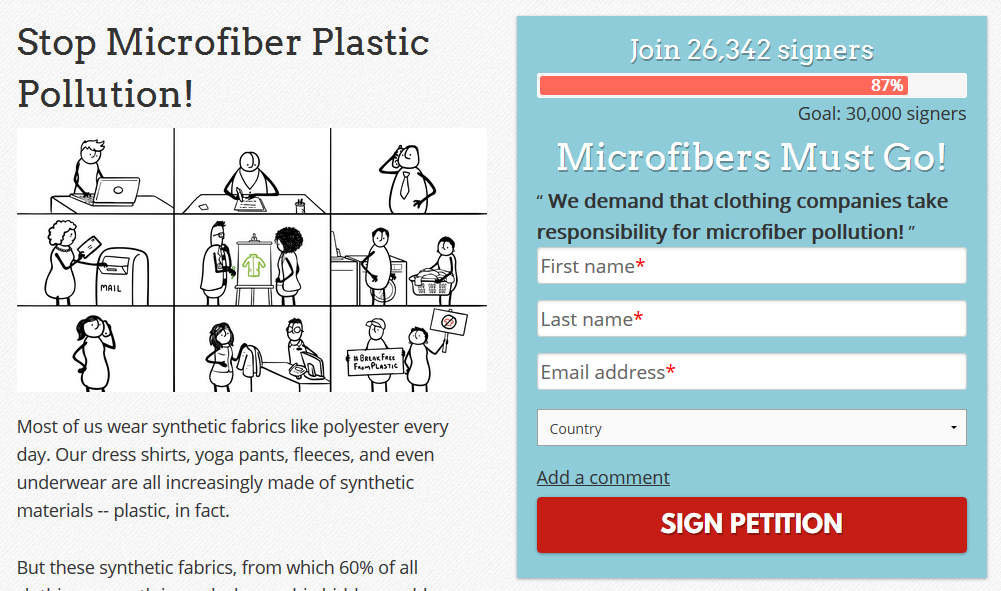 Not everyone knows that the synthetic clothes we wear may end up as food on our plates. We need to tell our friends and family about this, because if we want to turn the situation around, we need more support. And often we need to hear something multiple times from different people before we start to realize that a problem really is a problem. So please share this post on social media or forward it to your family and friends.

And of course, if you have more tips on how to reduce microplastic pollution, we would love to hear them. Please leave a message below. Thank you!

In 2013, after reading yet another article about plastic soup, Annemieke started her Dutch blog Plasticminimalism where she documented her small steps towards life with less plastic. To create more awareness about the adverse impacts of our plastic consumption, she launched Plastic-Free Tuesday in spring 2014. She strongly believes that building a better world starts by changing our own behavior. Annemieke is trained in environmental science and policy. She alternates living in the Netherlands, Sweden, the US, and China.